Summer tarried in Swarthmore this year and we tarried with it, taking long lingering walks and eating picnic suppers on our porches. Then fall flashed past in a rush of colorful leaves and we all looked up to find that it was suddenly December.

But, for anyone with a sought-after Nutcracker ticket in hand, it’s not a bit difficult to leap into the holiday mood instantly at Swarthmore Ballet Theatre!

The packed audiences at both of Saturday’s performances waited with bated breath as the lights went down. Mrs. Ardis herself welcomed us, and told the Nutcracker story in such a way that even the littlest audience members could understand what they were about to see.

The party scene has always been the heart of the tale. Denise Disney danced Clara’s mother with a lightness of spirits matched only by her lightness on her feet. Clara herself is played by the very talented Maia 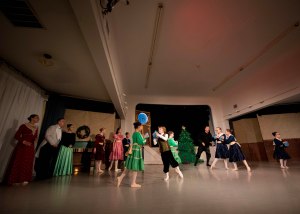 Virgil. Former SBT students often find that their training opens exciting doors for them. Virgil, who spent her summer dancing in Manhattan after being accepted for a summer intensive at the prestigious Alvin Ailey Dance Theater, is no exception.

The consummate adolescent, Clara played soldiers with her little sister, danced by Ruth Lefkowitz, and then quickly thought the better of it, all under the watchful eye of their father, danced by David Virgil

The party guests arrived and Drosselmeyer (William Hodges) presided over it all, giving out gifts, and presenting Clara with the nutcracker as the audience giggled and gasped at each new development. When the gypsy dancers finally burst onto the scene the small stage was truly

packed to the gills. But there was never any danger of confusion – each performer, large and small, was so alive with expression and focused so entirely on the action at hand that it felt as if the whole theatre were one of Drosselmeyer’s magical clockwork creations.

Clara bravely fought off a horde of enthusiastically mischievous mice and their imperious queen and then roused her prince. When the helmet came off and the prince’s face was revealed, the audience smiled with him.

The Nutcracker is Theo Runiewicz’s very first role at SBT. A perfect Nutcracker prince smiles and radiates a non-threatening heart-throbbiness appropriate to appeal to a young Clara, all while leaping,spinning and even lifting his partner. This is no small task even for an experienced dancer, but Runiewicz held his own and Virgil was a perfect partner to him, her experience and his enthusiasm combining to make their pas de deux truly fun to watch. I hope we’ll see more of Runiewicz at SBT soon.

After an action-packed first act, the peaceful strains of the Waltz of the Snowflakes can feel ponderous. But Eleanor Runiewicz and her snowflake attendants instantly took command of our attention and held it until the lights went down. Runiewicz’s Snow Queen was glamorous, and precise as a jewelry box ballerina. Her attendants were absolutely mesmerizing, we have much to look forward to as these young corps de ballet dancers come into their own. 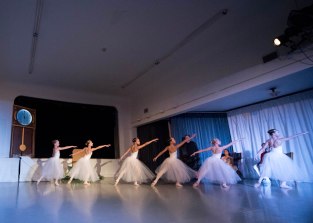 The second act was a visual treat. Costumes are designed by Lori Ardis and Bonnie Weaver, and hand sewn by a dedicated group of volunteers. This year’s palette featured sumptuous jewel tones for the Waltz of the Flowers, Quartet, Tarantella and Spanish dance. These rich colors were reminiscent of old-fashioned Christmas tree decorations and they absolutely sparkled under designer Doug McCullough’s beautiful lighting. The simple yet dramatic use of wing-like gauze robes for the Chinese dance was breathtaking and unforgettable.

Grace Hodges has been lighting up the stage at SBT for years and her Sugar Plum fairy was a delight to watch. Her solo had a jaunty

confidence that matched the puckish edge to the music and when she wrapped things up with a dizzying series of inside and outside piqué turns the audience applauded in awed delight. Her pas de deux with veteran cavalier, Donn Guthrie, was nothing short of athletic.

Guthrie wowed us again in his Arabian with partner, Mia Davis. Davis’s long lines and amazing flexibility were a great match for Guthrie’s strength and they had our hearts in our mouths again and again as he lifted her higher and higher, ending with Davis at the ceiling, stretched into an impossibly swanlike arch and balanced aloft by just one of Guthrie’s hands.

Each year the choreography team of Lori Ardis and Amber Flynn create the entire ballet from scratch to take full advantage of the unique gifts of the dancers cast in each role, reprising just a few audience favorites here and there. This year’s shepherdess dance was altogether new. Rose Hodges made the role of the lead shepherdess look effortless, her pointes never making a sound on the Marley. William Hodges partnered her handsomely.

Other standouts in the second act included Geraldine Leech’s spirited

Spanish dance, the Chinese dance, the Candy Canes, the Quartet, and Nathaniel Hodges’s Tarantella, as well as Mother Ginger and her children, and the exquisite Waltz of the Flowers.

Ellen McCullough has been a hardworking standout in the corps de ballet at SBT for as long as I’ve been attending performances. Her sheer happiness as she danced the Dew Drop Fairy was a palpable thing and Ardis and Flynn perfectly 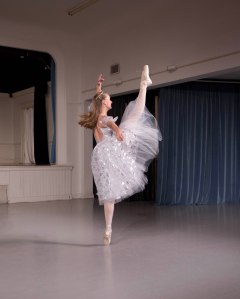 showcased McCullough’s beautiful extension and her infectious smile in a dance that was light as air, and accentuated by a filmy costume that glimmered in the lights like a real dew drop with McCullough’s every leap and turn.

When it was time for Clara and her prince to return home I don’t think I was the only audience member who didn’t want the performance to end.

Tickets are sold out for this year’s performances, but the best way to remember your tickets for next year is to sign your kids (or yourself) up for classes! Visit www.swarthmoreballettheatre.com to learn more.

All photographs are shared courtesy of Kristen Herzel and Swarthmore Ballet Theatre. 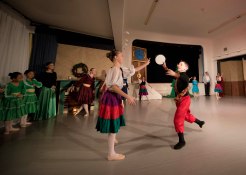 One response to “A Bright & Beautiful Nutcracker”