Swarthmore-Rutledge Elementary students enter the auditorium to perform their Winter Orchestra Concert (conducted by Mr. Shaul)  for an enormous crowd.

The Wallingford-Swarthmore school district music program has always been beloved by both students and the community. From the orchestra to the band, formal musical study is an integral part of a WSSD education. (WSSD had even been placed on the list of “Best Communities for Music Education” for three years in a row by NAMM.) Beginning in third grade, all students are offered the opportunity to take free lessons on instruments (though musically gifted children who have studied their instruments outside of school sometimes begin even sooner).

But music finds its way into so many other school activities. This year’s Martin Luther King, Jr. Day celebration culminated in an assembly that included a play performed by 3rd graders with songs both during and afterward. The play was followed by a spirited visit from the incredibly talented students of Philadelphia High School for Creative and Performing Arts that had the whole crowd singing and clapping along. Afterward, SRS principal, Dr. Tuck herself accepted the microphone and, declaring herself inspired by her charges, sang her heart out to her students in a medley dedicated Dr. King’s legacy.

The fifth grade chorus performs beautiful songs of the season at the SRS Winter Concert, led by Miss Suarez and accompanied by Mr. Shaul on piano. 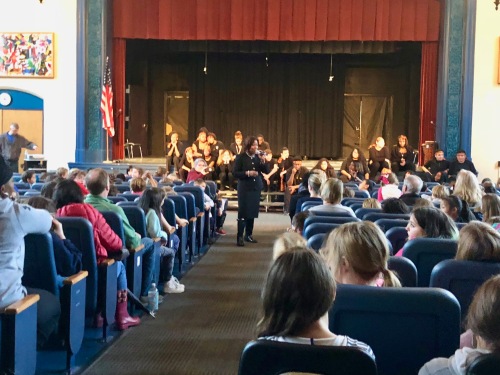 How many students can claim that they have been serenaded by their principal? Dr. Angela Tuck sings a medley inspired by Dr. Martin Luther King, Jr. to a rapt audience of students and parents as performing arts students from CAPA look on.