It was a sunny Saturday in Swarthmore, but thunderstorms were in the forecast. As ominous clouds gathered overhead, a small crowd of formed outside Swarthmore Ballet Theatre. These were the lucky ticket-holders for the opening performance of Giselle.

The changing weather was appropriate for the subject matter.Giselle tells the story of a beautiful young peasant girl who falls in love with a nobleman. The ballet begins with joyful villagers dancing in bright costumes.

But what follows involves death, ghosts and a midnight threat against the living.

The mother-daughter team of Lori Ardis and Amber Flynn crafted a beautiful variation on the original 1841 Coralli & Perrot choreography, creating a ballet that perfectly mines their company’s talents. The SBT Giselleproduction is light as air and then heavy as a Shakespearian tragedy.

The house lights went down and Mrs. Ardis herself came out to introduce us to the story. Then we were transported to a German village where jubilant villagers prepared for the dance.

I’ve said it before, but it bears repeating that every single member of this company is one hundred percent committed to his or her role, no matter how large or small. A glance across the tiny stage any given moment might include two maids arguing, a gaggle of girls in a tizzy over the arrival of the noble family, or even a boy yearning to knock on the door of the young woman he admires. As wave after wave of pointed feet, smiling faces and exquisitely costumed dancers surged the stage, I was reminded that each member of the corps was an integral part of telling this story.

Theo Runiewicz is a relative newcomer to SBT, but his expressive eyes and impressive leaps make him a great addition to the company. (Fun fact: Rumor has it that Runiewicz has been banned from practicing jumps backstage because his head actually hits the ceiling.) His character Hilarion is in love with Giselle though his feelings are not reciprocated. Hilarion’s rivalry with Albrecht (Donn Guthrie), the nobleman who steals her heart, went from funny to dangerous. And Hilarion’s dance with his sister showed that this dancer is upping his partnering game. I can think of no better way to do so than under the tutelage of his partner (his real- life sister) the very talented Eleanor Runiewicz.

Maia Virgil is no stranger to dancing difficult roles, but Giselle is the ultimate challenge. Forbidden from strenuous activity by her weak heart, the peasant girl Giselle must dance as lightly as a cloud. As the story continues, both the acting and the dancing become even more difficult. Virgil rose to the challenge, leaping so lightly she seemed to float under the watchful eye of Giselle’s father (danced by William Hodges) who hilariously marked each of her movements to be sure she did not seem to be exerting herself.

Donn Guthrie danced the role of Albrecht with real heart. His desire to hide his noble birth and dance with the villagers was apparent, and his difficult partnering work with Virgil was so beautifully done it seemed almost effortless.

Ellen McCullough danced the role of the duchess with a sparkling elegance. Her glamourous smile had the whole village smiling back at her as they watched her place a necklace around Giselle’s neck to honor her for her lovely and unusual dancing.

But all smiles were gone in an instant when the truth came out that Albrecht was betrothed to another. After a first act full of funny moments, the audience watched in stunned silence as Giselle tore her hair down and danced herself down a palpable memory lane of her time with Albrecht, and then into madness, until her poor broken heart stopped beating.

Act Two began with the introduction of the Willis, the ghosts of wronged women who exact their revenge by finding men who are in the woods alone at night and forcing 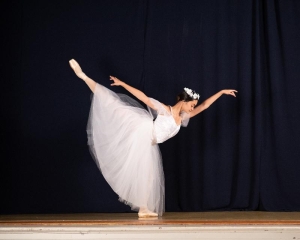 Mia Davis as a Willi

them to dance themselves to death.

The lighting for this production was designed by William Hodges and run by Doug McCullough. SBT’s new lighting is both environmentally friendly and infinitely adaptable – allowing for the stage to be utterly transformed without extraneous changes to David Flynn and April and Bill Reeser’s striking sets. Nowhere was this more evident than in the scenes with the Willis, where lighting set the mood and accentuated the haunting beauty of the corps de ballet’s costumes, designed by Bonnie Weaver. 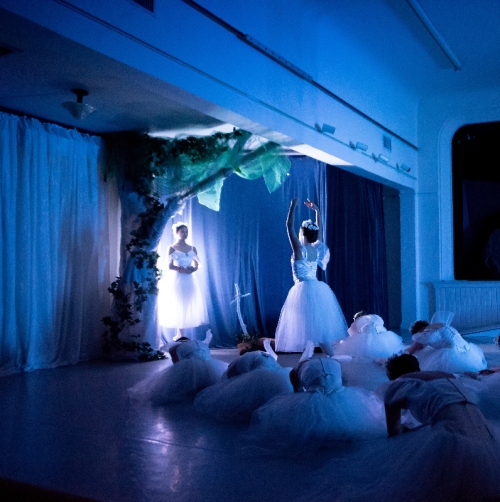 A double line of SBT’s powerhouse ballerinas stretched diagonally across the stage in cobalt moonlight, forming an aisle down which Myrtha, queen of the Willis, danced, coaxing their newest sister out of the grave.

When Giselle appeared in her ethereal white veil the terrifyingly beautiful picture was complete.

The Willis danced with restrained passion and when Albrecht appeared to mourn his lost love he caught the eye of their queen.

I’ve been watching Grace Hodges dance since she did the Spanish dance in the Nutcracker back in 2013. Hodges is always a joy to watch and she played this fierce role to perfection. Albrecht’s pleas for mercy were lost on the cruel queen as she pushed him farther and farther toward exhaustion.

I won’t give away the ending here, but this is one dramatic story and SBT kept us all on the edge of our seats until the very last note of the score!

Maia Virgil as Giselle and Donn Guthrie as Albrecht

Want to see what all the fuss is about? I’m told there are a few tickets remaining for next week’s Saturday performances at 11:00am and 7:30pm. Stop by half an hour before the performance to get yours!

And of course, the best way to remember to snag tickets is to sign yourself or your children up for ballet classes! Visit SwarthmoreBalletTheatre.org to learn more!