Fairy-light snowflakes adorn the lampposts in downtown Swarthmore, and the display tables at the Co-op are laden with treats in red and white packages. But it doesn’t really feel like the holiday season until we see the crowds gathering outside Swarthmore Ballet Theatre, eager to partake in the magic of the classic tale of childhood and adventure.

Swarthmore Ballet Theatre’s The Nutcracker is choreographed anew every year by Lori Ardis and Amber Flynn, in order to mine the talents of each dancer in the ensemble. This year’s production showcases an especially diverse and powerful group of dancers. The youngest is 6 and the oldest is 84. Altogether 63 dancers share the stage in the intimate space.

The party scene introduces the Stahlbaum family, including the elegant Clara (Elizabeth Si) and her mischievous little sister (Joya Denninger) who had the audience giggling as they alternately played and argued, like real sisters. As the families arrived to celebrate the holiday with the Stahlbaums, the stage filled with dancers young and old, each of whom was fully committed to his or her role. A quick gaze across the stage might highlight an interaction between mother and children, or a confiding smile between the Admiral and an elegant lady. William Hodges knows how to command the stage as Drosselmeyer and he had the audience laughing as he tricked Clara into thinking she wasn’t getting a present.

Adelaide and Enrico Faccio took the stage with amazing energy as the Gypsy dancers. Adelaide is a long-time member of the SBT corps de ballet and it was lovely to see her in a pas de deux. Enrico is a new face and brought wonderful athleticism to his work. 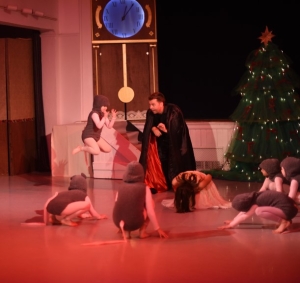 William Hodges as Drosselmeyer with Clara and the mice

When the party was over and Clara snuck downstairs in the night to visit with her nutcracker doll, she was assailed by a horde of truly tiny mice. These little dancers are the youngest allowed to perform in a company production and a perfect example of the discipline and joy cultivated by Ardis and Flynn. Each mouse attacked her role with gusto and precision, much to the delight of the audience. And we were all on the edge of our seats as the mice and soldiers joined the battle between the Nutcracker and the Royal Rat (Trinity Clow-McLaughlin).

When Theo Runiewicz emerged as the nutcracker doll come to life I think we all sighed a little at his charming smile. Runiewicz’s commitment to his technique and training since his SBT debut in 2017 is evident. The partnering between the Nutcracker and his Clara (Elizabeth Si) looked effortless, though their lifts and perfectly synchronized steps were extremely difficult. Si has a sylphlike appearance that belies her incredible strength, which combined with her exquisite technique make her a formidable dancer.

Act one wrapped up with Geraldine Leech’s beautiful performance as the Snow Queen with her Snow dancers. The ethereal choreography and costumes truly gave the sensation that it was snowing indoors.

Geraldine Leech as the Snow Queen

Act Two began with the angel (Eleanor Runiewicz) in a gorgeous solo with complicated footwork choreographed by the dancer herself.

The whole second act flew by with one incredible dance after another. Just a few of the standouts were:

Claire Ross in the Russian

the Spanish dance featuring Ava Manaker, who seemed to be light as air, the Russian dance with Claire Ross, whose musicality was a standout in last spring’s a la Modern production as well, and of course the death-defying Arabian with SBT favorite Donn Guthrie and the wildly talented Naomi Si, whose gorgeous dancing and powerful stage presence had the audience gasping and cheering as her partner held her aloft again and again. 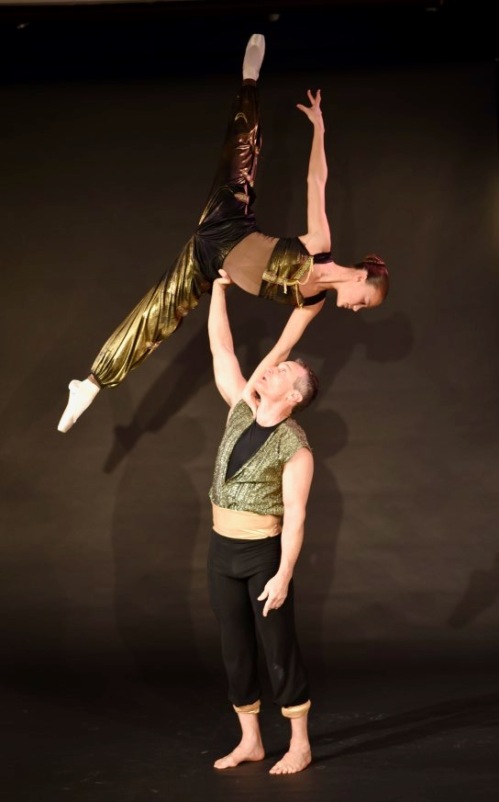 The Waltz of the Flowers is a beautiful and lengthy piece of music. Choreographer Amber Flynn puts a corps of the most experienced dancers in this piece each year as the Flowers and the Dew Drop Fairy. This year, Letitia Prosser was absolutely arresting as the Dew Drop Fairy. She rose from a bank of Flowers like Pallas Athena in a shimmering silver costume and held the audience in her spell as she lifted her arms aloft for a full measure of music before bursting into a sea of movement. From this moment until she finished the dance, nearly seven minutes later, Prosser spun, leapt and charmed the audience, as groups of her gorgeous attendant flowers took turns dancing and retiring offstage. The athletic prowess of this young dancer was evident as each jump and turn seemed only to add to her exultation, never depleting her ceaseless energy.

The pas de deux between the Sugar Plum Fairy (Rose Hodges) and her cavalier (Donn Guthrie) was absolutely mesmerizing. Fans have watched Hodges grow up on the SBT

stage. Her serene smile belies the difficulty of the steps, and Guthrie partners her masterfully through endless arabesques and athletic lifts.

Too soon, Clara was drawn back home again to wonder if her time with the nutcracker was real or only a dream.

But for the lucky audience, the magic of the production was very real and very memorable – a welcome return to the wonder of childhood holidays in the midst of a busy season. 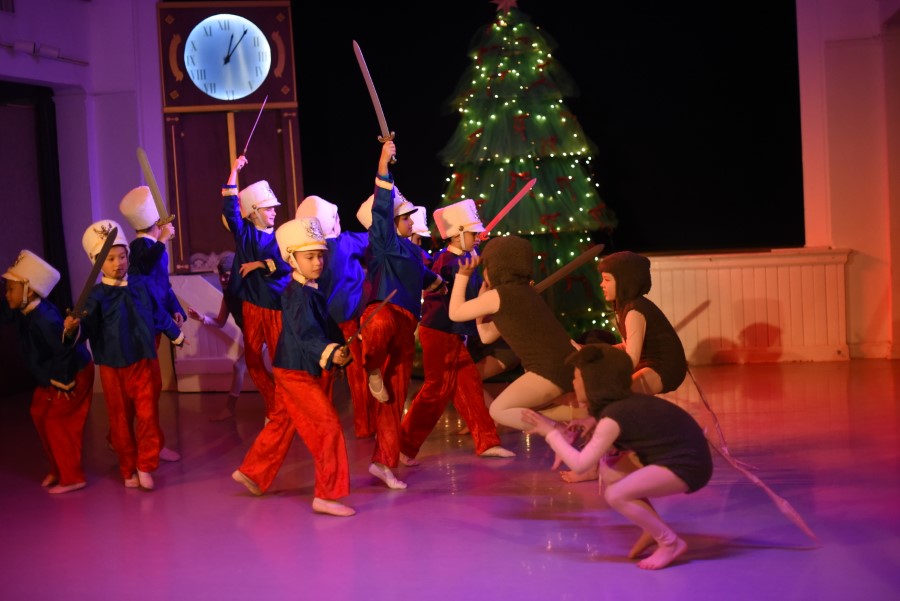 The best way to remember your tickets for next year is to sign your children or yourself up for classes next year! Professional level ballet classes are available for the whole family right here in Swarthmore. Read more about taking classes at SBT here.

More than 100 volunteers assist in the production of the ballet. The Lori Ardis Ballet Company is a non-profit and can accept donations (recent fundraisers have outfitted the theater with beautiful eco-friendly lighting). Reach out to SBT to learn how to be part of the magic by donating time or funds!